Are You Too “Out-Of-Shape” To Start Training BJJ? 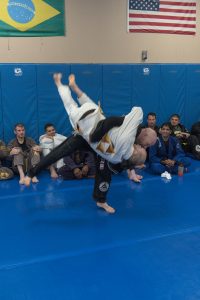 It’s not uncommon for prospective or new members to express concern about being too out-of-shape for Brazilian Jiu-Jitsu. Occasionally they will even say they aren’t ready to join  BJJ yet, and would like to go to the gym and get in shape before joining.

It may seem like holding off on starting BJJ until you get in better shape is a good idea. On the contrary, it’s among the worst reasons. If you’re in a BJJ school, about to enroll, then you’re about to take the first step towards getting in shape- don’t pass that by to find a less exciting way to get in shape first!

Think about it… If you’re not already going to the gym it’s because you really don’t want to. And if you’re sitting down with someone at a Brazilian Jiu-Jitsu school it’s because you DO want to train BJJ! What are the odds that all of a sudden you’re going to be motivated to go to the gym? Unfortunately, most people are more likely to continue to put off both exercise at the gym and classes at a BJJ school.

One of the biggest advantages to training BJJ is that you can get into phenomenal shape while learning and developing realistic self-defense skills. You will become immersed in the problem-solving that occurs in BJJ – it is often referred to as “physical chess” – and often won’t even think about the fact that you’re exercising. At the gym, you’ll be bored out of your mind running on a treadmill day after day, or doing the leg press and bench press for the 1,000th time.

Even if you do enjoy working out at the gym, wouldn’t it be nice to mix up your workouts with something that provides a whole bunch of other benefits too? Benefits like self-defense skills, patience, focus, and more.

Perhaps most beneficial is the cardiovascular workout. The stamina that you’ll develop will be noticeable within a couple of months – at most. And although training three days a week is optimal, most students start out with two days and see every one of the benefits I’ve listed.

One benefit that many people get from exercise is peace of mind and clarity. This is typically attributed to the release of endorphins- chemicals in the brain that are released during strenuous exercise. You’ve probably heard the term “runner’s high,” and we could just as easily call the post-training feeling a “BJJ high.” The difference is that to achieve a runner’s high you’ve got to log some serious mileage, and that brings us back to the boredom of the standard workout.

I should be clear, there’s nothing wrong with the standard weight-lifting or cardio workouts. In fact, I recommend them as part of a balanced exercise routine. But there’s no denying that they can become monotonous, and the same cannot be said about BJJ at a good school. If you train at a top-tier BJJ academy you will enjoy just about every class.

But what if you have physical limitations? What if you have a pre-existing injury that makes it difficult for you to do certain movements? Not a problem! With a few exceptions, previous injuries or limitations are not an issue with Brazilian Jiu-Jitsu. There are two reasons why this is true. First, BJJ was created- more accurately modified from traditional Jujitsu- to allow someone of inferior physical abilities to defeat a person who is bigger and stronger than them. In fact the man who is regarded as the main innovator of BJJ, Helio Gracie, was known as a thin and fairly weak man. Yet he faced and defeated many opponents in bare knuckle fights and grappling matches.

One more thing to consider is that with thousands of people training Brazilian Jiu-Jitsu in the U.S. and millions worldwide, there are surely people who are training while dealing with the exact same limitations that you are. And if they can do it, so can you.