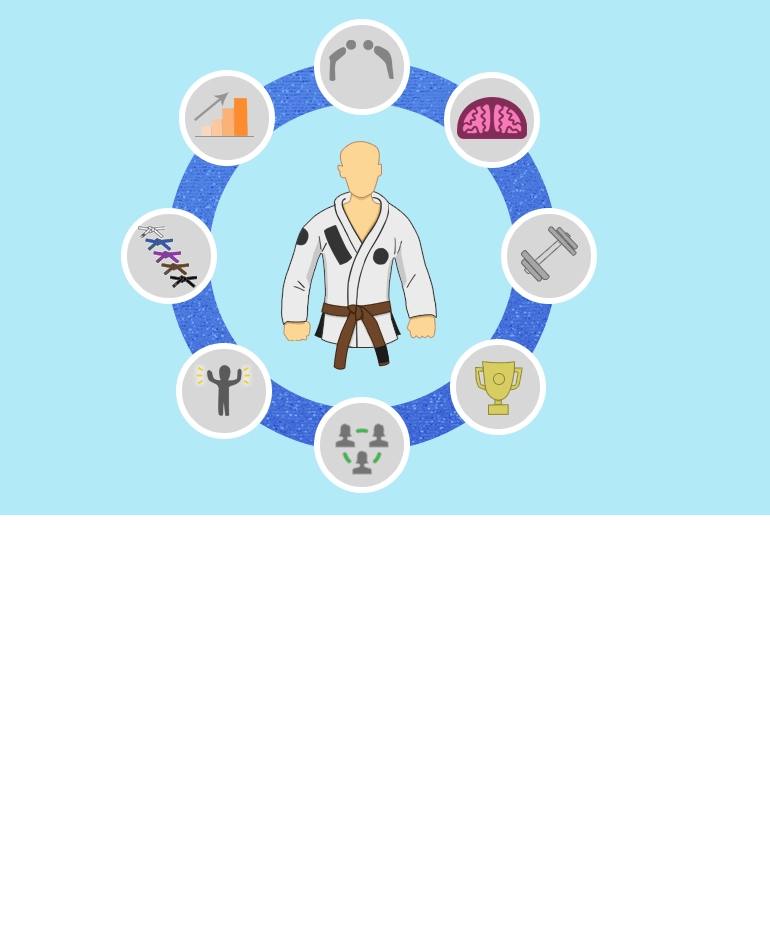 Brazilian Jiu Jitsu is a difficult but rewarding martial art. Unlike many other martial arts it has no striking, instead mostly taking place on the ground and utilising chokes, strangles and joint locks.

In newspaper advertisements from 1930s Brazil, the benefits of jiu jitsu were listed as “more agility, sharper reflexes, more acute senses, improved blood circulation and respiration, and a sense of absolute tranquility, as a result of the self-confidence that the techniques of jiu-jitsu would instill”.

Today Brazilian Jiu Jitsu has been around long enough for us to know the benefits beyond the marketing hype (although I would still love a sense of absolute tranquility). Here are some of the benefits of BJJ:

BJJ sparring rounds (also called rolls) are generally five minutes in length, and include a variety of low and high intensity efforts with little rest. This makes BJJ sparring a great form of exercise. According to our estimation based on research carried out on BJJ athletes, 30 minutes of hard rolling could burn approximately 500 calories. While jiu jitsu athletes’ VO2max is only moderate compared to other sports, it’s still a good form of exercise requiring aerobic and anaerobic endurance.

There’s a deceiving amount to learn in BJJ, starting with basic positions, sweeps, transitions and submissions. There’s a huge amount of techniques you could potentially learn, and because no one opponent is exactly the same, you’ll be forced to constantly adapt which of these techniques you use. That’s just the technique portion. Then there are the subtle concepts embedded within jiu jitsu like balance, leverage, framing and more. It’s unlikely you’ll run out of new things to learn in BJJ.

BJJ is an interesting martial art because of the regular opportunities to spar and “test” your techniques and hypotheses against a resisting opponent. Most classes will include 15 – 30 minutes of sparring broken up into 5 minute rounds where you can spar with opponents of different weights and skill levels. This means you’re constantly going up against different people with different game styles, and must constantly refine and change up your game.

4. It’s a form of self defense

Jiu Jitsu teaches you valuable self defense skills, particularly how to restrain opponents, ground survival techniques, and submissions designed to render an opponent unconscious or immobilize their joints.

Jiu Jitsu, in particular no gi jiu jitsu, has quickly become one of the cornerstone martial arts used by mixed martial artists in high profile fight promotions like the UFC and Bellator. It has demonstrated a high utility in MMA, so if you plan to learn and compete in MMA, it’s a useful addition to your arsenal.

6. You’ll be part of a new community

When you start learning BJJ you’ll be introduced not only to your gym community, but also the wider thriving international BJJ community. As an additional benefit, BJJ is unique in that it’s quite easy to not only meet the best athletes in the sport, but also train with them, spar with them and attend their seminars.

7. There’s lots of competitions to enter

There are numerous BJJ competitions held around the year in many countries, so you can measure your skills against others in a high intensity setting. These are run by different organisations, with the biggest arguably being the International Brazilian Jiu-Jitsu Federation (IBJJF). There are also other organisations which run competitions with slightly different rulesets like Grappling Industries, UAEJJF, ADCC and SJJIF. Competition gives you an opportunity to test your jiu jitsu in an intense but safe way, and also allows you to see the differences between the jiu jitsu taught at your gym versus other gyms.

8. There are progression and mastery opportunities

BJJ has a belt and stripe system which goes from white all the way to black belt and even beyond to red belt. Gyms handle belt and stripe progression in different ways, with some using gradings and others being more subjective. As you progress in your BJJ journey you can also specialise in different guard and game styles, and master various aspects of these styles.

9. There are options to teach

If you’re looking for opportunities to challenge yourself by teaching, BJJ is one way to try it. Many gyms run kids classes where budding instructors can begin teaching jiu jitsu as assistant coaches. Teaching also has a great side-benefit of solidifying your own knowledge as you give back to your own jiu jitsu community.

Above all else, BJJ is difficult but fun. The first time I pulled off a successful submission in training I was elated. When your game plan comes off perfectly, or you roll with a trusted training partner and mix in some healthy trash talking you’ll realise just how much fun it is.

In BJJ you’ll often have to wait for the best time to make an escape or bait an opponent. When trying to escape, especially when wearing a gi, you’ll need to patiently defeat each of your opponent’s obstacles before successfully making an escape.

2. It develops your problem solving skills

Oftentimes in BJJ you’ll come across guards or game styles you’re not familiar with. Sometimes you’ll have to improvise on the fly to try and pass these guards or overcome these styles. Sometimes this will result in failure and sometimes you’ll be successful.

Brazilian Jiu-Jitsu is mentally and physically challenging. To continuously make it to class each week consistently requires discipline in the face of regular and normal “losses” in sparring. As mentioned above, this is important for growth.

4. It develops your ability to deal with pressure

One of the biggest lessons I learned when starting jiu jitsu was to relax, especially when in an unfavorable position where your first reaction might be to panic. Relaxing under pressure allows you to better conserve your energy and plan your next move.

It’s normal to regularly experience failure when sparring in BJJ. These losses are necessary and crucial for your learning journey. Still, the act of submitting and losing means that your ego necessarily takes a healthy hit every time you go to training.

After training in BJJ for an extended period of time you’ll have an impressive list of successes when sparring or competing which will help build confidence. You’ll also eventually progress in rank and prove that you can survive on the mats. The self-defense benefits of jiu jitsu might also help to inspire confidence when you’re out of the gym.

7. It can clear your mind

I’ve personally entered my gym on numerous occasions with stress or after experiencing a bad day. Every time I step off the mats later that night after some sparring, I feel mentally clear and often forget what I was worried about in the first place.