Why Jiu Jitsu Training is The Best Way To Stop Bullying 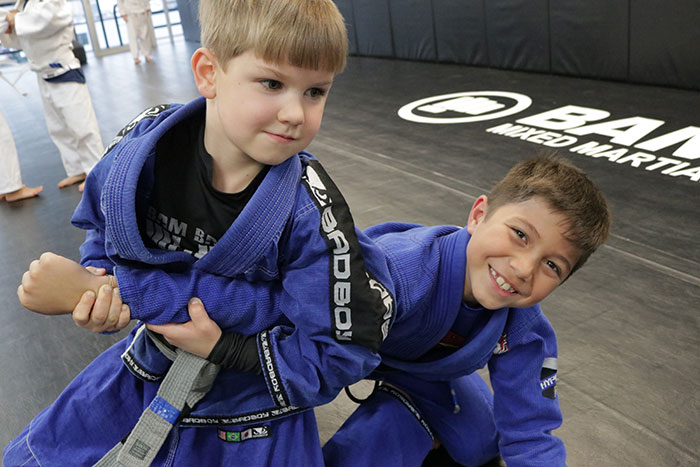 Thousands of kids suffer from being bullied every day. But what should they do about it?

Tell their parents? Tell the teacher? That may go some way to helping solve the problem, but it is hardly sufficient.

It is my belief that Jiu Jitsu training is the absolute best way to either solve the problem of being bullied, or better, prevent it from happening in the first place.

What Exactly Is “Bullying”?

Bullying is intimidation or domination toward someone perceived as weaker, a way to establish superiority through coercion or force. But someone can act out against another in one instance and not be a bully; what defines bullying is that this intimidation is repeated and sustained over a period of time, doing emotional and physical harm to the victim.

It can take the form of physical coercion, or verbal intimidation, or even social bullying, such as shunning from a group at school.

Giving a child or young adult training in jiu jitsu is a profound answer to the problem of bullying because it provides the physical and mental training necessary to shut it down fast.

How Jiu Jitsu Can Help A Bullied Child​

The first kind of damage that results from bullying is PHYSICAL. And this instills fear into a child. Fear is a sensible reaction to bullying, both the fear of being hurt and the fear of retaliating when you have no skills.

Jiu jitsu addresses the threat of physical attacks in a very realistic way. Real life fights most often occur on the ground after one person has knocked the other down. Jiu jitsu techniques begin from a ground position, which is the most common defensive position in an attack. The training provides the skills needed to stop an attacker through technical moves that are based on leverage, rather than strength. The techniques practiced use the size and strength of the opponent against him, allowing a smaller person to utilize leverage, locks, and holds that can neutralize a bigger, stronger attacker. Because the grappling can go in many directions, depending on the techniques employed, jiu jitsu trains you to analyze the situation and make the best of it, while not getting in trouble in school.

Unfortunately, in Texas if you are attacked by a bully and throw a punch or kick back, you can be charged with assault even though you are just defending yourself. Jiu jitsu neutralizes the opponent through locks and holds without ever needing to punch or kick.

What is more, training in jiu jitsu breaks down the fear of physical combat that many victims of bullying experience. Just by getting down on the ground and practicing the techniques over and over again, you use and strengthen every muscle in your body and train it to react without hesitation, so that when the real life scenario occurs, you are comfortable taking action to defend yourself quickly and competently.

The Mental Benefits of Jiu Jitsu For A Bullied Child

The physical training of jiu jitsu will allow you to disable a bully and prevent future physical attacks; but the skills acquired in jiu jitsu go deeper than the physical level.

Bullies are really cowards because they prey on those who seem weak, lacking confidence. So the best way to prevent becoming the target of a bully in the first place is to strengthen body and mind, so that you are projecting confidence. When we are not feeling confident, we don’t look people in the eye, we may slump with shoulders forward, we aren’t firm in shaking hands, we might hold back in a group.

The format of jiu jitsu classes reinforces self-confident behaviors. Students make eye contact with their instructors and with each other, they stand straight to greet each other and shake hands. These simple gestures of respect, which are actually evidence of self-respect, become natural and ingrained habits of interacting that carry over outside of class. There is also no better way to grow in confidence than to earn it; as you learn the techniques and practice them, you will be amazed at what your body can do, and the result of the training is a newfound respect for what your body is capable of.

Jiu Jitsu is also great for those who are naturally shy, because the format of the class builds friendship among students as they trust and learn from one another. Jiu jitsu requires that you grapple with any number of partners, all sizes and personalities. Sparring in this way is itself socialization, providing skills that will carry over into group projects at school and team sports.

Bullies target outsiders, not those who can get along in a group. Also an important lesson taught through jiu jitsu training is resilience, learning to win and lose gracefully. In grappling, you learn to get up, adjust, and try something new when your opponent has defeated you, rather than turning inward in depression when setbacks are encountered.

In the daily life of a young person, if stresses are internalized rather than released, this can also magnify negative experiences and lead to depression; the release of stress through exertion is one more positive effect of training. The habits acquired in jiu jitsu inevitably carry over into life, making you a stronger and more confident person.

Why Jiu Jitsu Is A Powerful Weapon Against Bullying

The most effective counter-attack against a bully will hit on two levels, mind and body, equipping a young person with the physical skills to disable the attacker, while building up his confidence and self-respect.

This is why jiu-jitsu is such a powerful weapon against bullying.