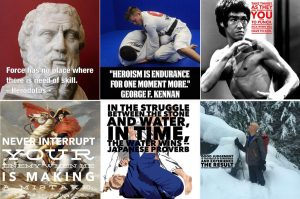 “However beautiful the strategy, you should occasionally look at the results”
Sir Winston Churchill

“You must not fight too often with one enemy, or you will teach him all your art of war”
Napoleon Bonaparte

“A good battle plan that you act on today can be better than a perfect one tomorrow.”
General George S. Patton

“The more you sweat in training, the less you bleed in combat”
Richard Marcinko

“On the day of victory no fatigue is felt”
German Proverb

“Call no man happy till he is dead”
Aeschylus, Ancient Greek playwright

“Endurance is one of the most difficult disciplines, but it is to the one who endures that the final victory comes”
Gautama B.

“For how can a man die better
Than facing fearful odds
Defending the ashes of his father
And the temple of the gods?”
TB MacCauley

“Success is not final, failure is not fatal: it is the courage to continue that counts.”
Winston Churchill

“In the struggle between the stone and water, in time, the water wins”
Japanese Proverb

“In real life, strategy is actually very straightforward. You pick a general direction and implement like hell.”
Jack Welch

“Sometimes you get the bear, sometimes the bear gets you”
Gypsy saying

“Never interrupt your enemy when he is making a mistake”
Napoleon Bonaparte.

“When it comes to performance standards, It’s not what you preach, it’s what you tolerate”
Jocko Willink

“What gets us into trouble is not what we don’t know. It’s what we know for sure that just ain’t so.”
Mark Twain

“Be kind, for everyone you meet is fighting a hard battle you know nothing about. Always.”
Various authors attributed

“It is not the answer that enlightens, but the question.”
Decouvertes

“Heroism is endurance for one moment more”
George F. Kennan

“The tragedy of life lies not in not reaching your goals, but in having no goals to reach”
Benjamin Elijah Mays

“You have enemies? Good. That means you’ve stood up for something, sometime in your life.”
Winston Churchill

“Difficulties strengthen the mind, as labor does the body”
Seneca

“In real life, the hardest aspect of the battle between good and evil is determining which is which.”
G.R.R. Martin

“I have had as many doubts as anyone else. Standing on the starting line, we’re all cowards.”
Alberto Salazar

“Not less than two hours a day should be devoted to exercise.”
Thomas Jefferson

Has anyone ever shared the true secret of success any more eloquently? #

“The heights by great men reached and kept were not attained in sudden flight
But, they while their companions slept, they were toiling upwards in the night”
Longfellow

“Learning defense improves the attack. If the lion knows how the prey can escape, it’ll capture it in a much more precise way”
Rillion Gracie

“How many things apparently impossible have nevertheless been performed by resolute men who had no alternative but death.”
Napoleon

“Fall down 7 times, get up 8 times.”
Japanese maxim

“It is not the critic who counts; not the man who points out how the strong man stumbles, or where the doer of deeds could have done them better. The credit belongs to the man who is actually in the arena, whose face is marred by dust and sweat and blood; who strives valiantly; who errs, who comes short again and again, because there is no effort without error and shortcoming; but who does actually strive to do the deeds; who knows great enthusiasms, the great devotions; who spends himself in a worthy cause; who at the best knows in the end the triumph of high achievement, and who at the worst, if he fails, at least fails while daring greatly, so that his place shall never be with those cold and timid souls who neither know victory nor defeat.”
Teddy Rosevelt

“This game is ninety percent mental, the other half of physical”
Yogi Berra

“The secret of getting ahead is getting started”
Mark Twain

“Only a fool does something new and thinks it will work for sure. Only a failure refuses to try something that might not work”
Seth Godin

“Force has no place where there is need of skill”
Herodotus